I’m human. And humans tend to have more empathy for other humans like themselves. Over the years, I’ve found more and more biases.

Okay, so, yeah. I’ve been kinda gone from here for a while. But that doesn’t mean I’m not writing. It just means that I’m apparently pouring out all my leadership … END_OF_DOCUMENT_TOKEN_TO_BE_REPLACED

I am ridiculously happy with my job and my company. 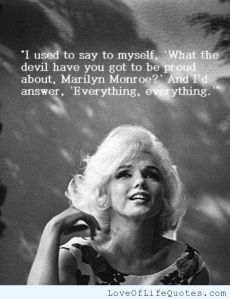 My colleagues respect what I say. Seek my opinion. Follow my leadership and simply expect me to follow theirs.

And then, this morning, when I was reading about the GitHub engineer who quit, I found myself wondering, “Is how I feel with my current job what men feel like at work?”

Suddenly, it makes more sense to me that men are more easily considered superstars. Because here’s what’s happening to me:

I realize that men have other challenges at work. I’m sure they’re challenges I can’t even imagine. And I know that no one escapes the repercussions of crappy, political, hostile environments.

But without gender pressure, I can get more done. I can be better at my job. I can be happy at work. My stress level is shockingly low, despite feeling all the stresses of a crazy seed-stage startup and the full measure of our growing pains and limited runway.

Is this what men feel like at work? It’s more powerful than I ever imagined.

So we’re looking for a CRM. Lots of startups are. It happens. You get to the point where you can’t track stuff in spreadsheets, the cheap stuff drives the marketing person (i.e., me) completely nuts, and you have to grow up and pay for something real.

Okay, no problem. so we’ll look at options. Oh, two of us know Salesforce really really well? Cool. Let’s look at that. Do some research. Figure out what kind of deals other companies get. Fill out a web form.  Awesome.

I naively thought that Salesforce would have its crap together with selling. After all, IT’S SALESFORCE. They wrote one of the rulebooks that I’m basing my sales process on.  Also, I thought, since I negotiated hundreds of software contracts during my 11 years in IT, that this should be a pretty easy negotiation.

I like sales reps. Even new ones. Except that the one we got had no idea whatsoever how to handle this deal. My coworkers got to the point that they could tell when I got him on the phone, because my body language and voice tone got rather amusingly annoyed.

I don’t know that I realized how badly a sales rep could screw things up with a customer who WANTS TO BUY, but this guy did. I spent the morning looking at other CRMs, and I emailed his boss a few minutes ago to ask for a different rep. I’ve gone from 100% wanting to build my business on Salesforce to just wanting this guy to go away so that I can set up my sales processes without getting stabby. Well, MORE stabby.

What did he do? So glad you asked!

Good grief. I can’t believe how hard he tried to lose this sale. Should be interesting to see if his manager can salvage the deal.

An email ruined my weekend. (And I’m still mad.) It was an email filled with extraordinarily useless feedback, including completely false accusations. The person who sent it was so unaware … END_OF_DOCUMENT_TOKEN_TO_BE_REPLACED

Well, maybe not YOU per se. But the total mushrooms that I’m reading today. <rant> For those of you who don’t have an IV drip of social media like I … END_OF_DOCUMENT_TOKEN_TO_BE_REPLACED

It’s easier than you may think to ‘kill’ your managers. I’m personally not the greatest middle manager in the world, but I’m grateful for my time as one, since it … END_OF_DOCUMENT_TOKEN_TO_BE_REPLACED

Dear world: You keep using the words, “hack”, “hacking”, and “hacker” in, frankly, bat-poo crazy ways. And I’ve just about had it. I went to a “sales hacker” conference last … END_OF_DOCUMENT_TOKEN_TO_BE_REPLACED

Recently, I got to have a blast telling a story. We put together a story about our company’s two-year history and posted it to SlideShare. In fact, I had so much fun that I’m going to show it, and then get on with my post:

I hope you flipped through that, because I work with a great bunch of folks who have senses of humor similar to mine (which is pretty darn remarkable when you think about it).

But anyhow, on to my point: storytelling.

When I was working on the storyboard for the slideshare, I tweeted:

Seriously loving the storytelling aspect of marketing today. Anyone else enjoy that?

Think about it for a second. What are you doing when someone asks you what’s going on? Or what happened? Or why the $%^&* exchange server is going on?

Whatever it is, you’re storytelling.

And with all good stories, yours needs to have a beginning, middle, and end. It also needs to have a plot people can follow. Frankly, as geeks, we pretty much suck at this. We give too much detail, or we leave out the beginning or the end. Whatever we do too much of (or not enough of), we lose our audience. Or we fail to consider our audience. Or something like that.

We’re always telling stories. If we’re aware of that, our communication – especially to non-geeks – will likely get infinitely better.